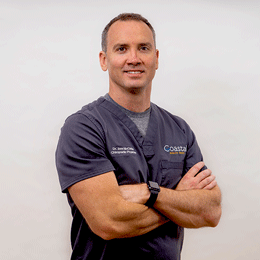 A lifelong Floridian, Dr. McClellan attended The Benjamin School in North Palm Beach, where his interest in athletics grew as a high school football and soccer player. While attending Ohio Wesleyan University on an athletic grant for football, he advanced his knowledge of athletics as a pre-physical therapy major. When an injury permanently sidelined him, he returned to Florida to work as an exercise coach. After five years helping clients achieve major health changes, Dr. McClellan’s interest in a naturalistic lifestyle led him to chiropractic care. After just two weeks as a patient, he committed to pursue his doctorate of chiropractic at Life University in Atlanta, Georgia. Dr. McClellan graduated Cum Laude in 2009, returning to Florida to practice in his hometown.

Dr. McClellan is a specialist in treating disc herniations, spinal stenosis, and arthritic conditions of the spine. His approach has helped many patients who’d already failed with physical therapy, chiropractic, injections, medications, and even surgery. He developed the Altus Health Group with the philosophy of targeting the underlying reasons behind patients’ pain and providing an array of medical services to effectively address these root causes. Dr. McClellan is passionate about helping patients and the latest options to advance successful care. He and his team remain at the cutting edge of medical and therapeutic advances.